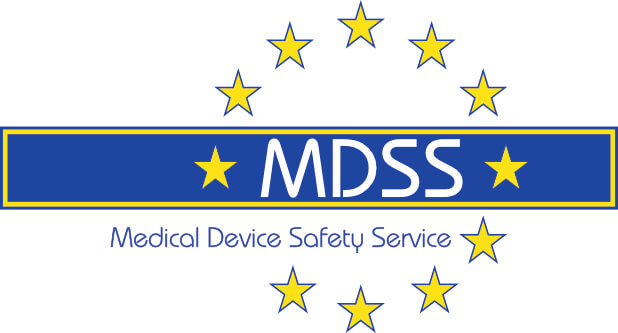 Brexit Deal! Business as usual! Until when??

There are no change in business in the UK with the current Brexit Deal in place (Agreement on the withdrawal of the United Kingdom of Great Britain and Northern Ireland from the European Union and the European Atomic Energy Community). Now the UK and the EU have the chance to agree on a trade agreement by December 31! Whether this will happen remains to be seen. Therefore, a hard Brexit is still a possible scenario and may occur on December 31. Until then it means business as usual with the UK.

We shall revisit this issue in due time because we are expecting a specific Medical Devices law for the UK shortly in order to prepare for all possible scenarios.

Here is the link to the MDSS News & Views Brexit history.

Agenda of the MDCG and the MDCG subgroups has been released!

The MDCG has been created according to Article 103 and the subgroups were implemented in 2019. The task are defined in Article 105 (see below).  Most likely we will see an increase of new documents and hopefully new notified bodies after each MDCG meeting.

2. Each Member State shall appoint to the MDCG, for a three-year term which may be renewed, one member and one alternate each with expertise …

The members of the MDCG shall be chosen for their competence and experience …
The alternates shall represent and vote for the members in their absence.
3. The MDCG shall meet at regular intervals …
4. The MDCG shall use its best endeavors to reach consensus. …
5. The MDCG shall be chaired by a representative of the Commission. …
6. The MDCG may invite, on a case-by-case basis, experts and other third parties to attend meetings or provide written contributions.
7. The MDCG may establish standing or temporary sub-groups. Where appropriate, organisations representing the interests … in the capacity of observers.
8. The MDCG shall establish its rules of procedure which shall, in particular, lay down procedures for the following:
— the adoption of opinions or recommendations or other positions, including in cases of urgency;
— the delegation of tasks to reporting and co-reporting members;
— the implementation of Article 107 regarding conflict of interests;
— the functioning of sub-groups.
14. The MDCG shall have the tasks laid down in Article 105 of this Regulation and Article 99 of Regulation

For risk class I manufacturer!

Warning: No additional  transition for risk class I products.  Products who are risk class I and stay of risk class I must fully comply to the MDR by May 2020.

Please consider the MDCG guidance Guidance Notes for Manufacturers of Class I Medical Devices cover.pdf - December 2019. It was recently published and is great outline of what needs to be done specifically for risk class I products (see also News & Views 2019.12.19). We guess we can call this THE EIGHT STEPS TO CLASS I CE MARK.

Indeed it does extract the important aspects and should get you in compliance quickly.

MDR deadline for risk class I Manufacturers – Ready to appoint MDSS as your MDR EC REP?

The MDR deadline for Manufacturers of risk class I products is approaching. The days until May 26, 2020 are numbered!

It is fundamental that class I Manufacturers prioritize their MDR compliance in order to ensure a smooth transition to the MDR and avoid any market disruption by May 2020.

The transition period has started in 2017. Manufacturers must update the declaration of conformity to reflect the compliance to the MDR. This does not include only an update of the technical documentation but also the requirements of Article 10 to meet the new MDR requirements.

CONTACT NOW your MDSS team to get your products ready to market by May 2020!!!

The existing MDD Authorized Representative contract will no longer be sufficient for the transition to the new regulation. The appointment of the Authorized Representative under the MDR is a mandatory requirement to achieve compliance by May 26, 2020. In order to act as your EC REP, the regulation requires that the Manufacturer provides an official Mandate to the EC REP.  Such a mandate shall be in writing and agreed by the EC REP.  The mandate shall contain a minimum set of tasks.  The new MDSS MDR EC REP contract is the basis for such a mandate. Clients should submit their MDR transition plans and consider MDSS resources to perform the tasks required under the MDR mandate.

MDSS has implemented a special plan for its clients.  Any remuneration fees still not used on the MDD contract will apply to the MDR Mandate.

The UK never ending story comes to an end!

We published a Brexit News & Views beginning of October for our clients to react, if needed, should a hard Brexit occur, which was on the horizon at that time.

Since then the core message has not changed. The importer in the UK is the UK responsible person (UK RP) by definition. Given the current draft regulation it is NOT foreseen to appoint an independent UK RP. As it seems the MHRA is aware of this difficult situation and communicated with some industry associations that they were indeed not very happy about it. Their guidance still has a few inconsistencies and does not necessarily reflect the proposed law. Also, the law has some inconsistencies and in some instances does not make sense.

What has changed since our last News & Views regarding Brexit:

Having stated the above, what needs to be done:

It is important to review and maybe adjust the UK distribution. Anyone who receives your product in the UK, whether directly from a manufacturer or from any of the remaining EU countries is the  importer and can only import if he also takes on the requirements of the UK RP. There are a number of consequences:

From our UK clients we hear that the MHRA is trying to give advice to the lawmaker to change the proposed law in order to allow for an independent UK RP. However, we have checked and there is no update - yet.

It is currently difficult to recommend a clear solution for the UK RP since the law is not finalized. Any agreement we would sign today most likely will have to be adjusted. Should there be the possibility of an independent UK RP then in that case a contract with MDSS is ready except for the any last minute changes.

In any case should December 31, 2020 become the deadline – again for a hard Brexit, then we recommend to stock products in the UK since in such an instance, trade will be significantly disrupted for a few months due the implementation of customs and border control.

Use of Symbols to Indicate Compliance with the MDR!

MedTech Europe issued in December an update on the List of Symbols.pdf, which may be useful to consider in particular for the transition to the MDR. For example it provides the indication that a device is a medical device.

As always, as long they are not harmonized, they must be repeated in the IFU including the description. The nice feature here is that the translations are already provided in case you will have to translate the IFU.

New documents published by the Commission!

- The European Medical Device Nomenclature (EMDN) - the nomenclature of use in EUDAMED!

The European Medical Device Nomenclature (EMDN) will be the nomenclature of use by manufacturers when registering their medical devices in the EUDAMED database.

The purpose of this document is to provide information regarding the basic principles and the structure of the Italian “Classificazione Nazionale Dispositivi medici” (CND).

New Guidance published by the Commission! 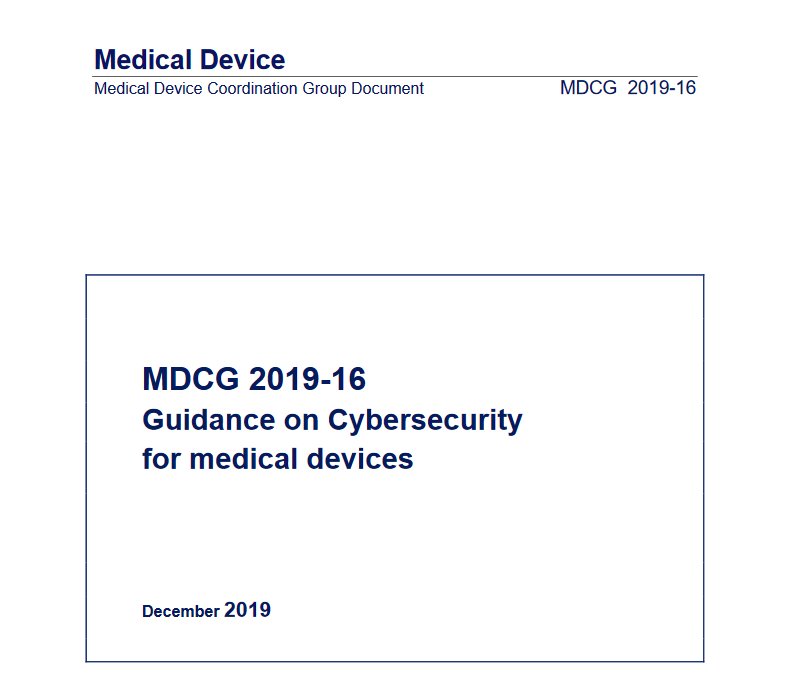 The  two  new  Regulations  on  medical  devices  745/2017 (MDR) and  746/2017  (IVDR)(hereafter called the Medical DevicesRegulations) have been adopted and entered into force on 25 May 2017. The two Regulations, which are to replace three EU Directives, apply progressively until May 2020 for medical devices and May 2022 for in vitro diagnostic medical devices. Among the many novelties introduced, the two  Regulations enhance the focus of legislators on ensuring that devices placed on the EU market are fit for the new technological challenges linked to cybersecurity risks. In this respect, the new texts lay down certain new essential safety requirements for all  medical devices that incorporate electronic programmable systems and software that  are medical devices in themselves. They require manufacturers to develop and manufacture their products in accordance with the state of the art taking into account the principles of risk management, including information security, as well as to set out  minimum requirements concerning IT security measures, including protection against unauthorised access.

Read the compete document here. Please leave your comment/opinion below whether the document helpful for your MDR endeavor.

Medical Devices: Guidance document Implant Card relating to the application of Article 18 Regulation (EU) 2017/745 of the European Parliament and of the Council of 5 April 2017 on medical devices.

This document describes the intended use, content and information to be provided by the manufacturer together on the IC and a definition of fields to be completed by the implanting healthcare institutions or healthcare providers according to national law in Member States. 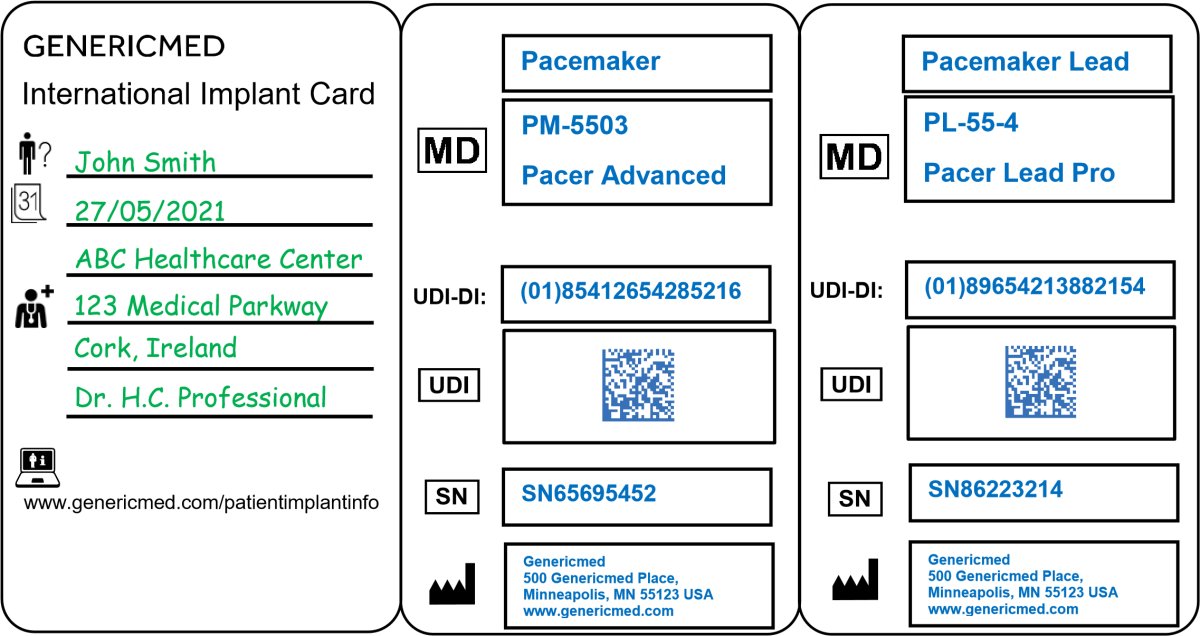